Periscope is taking over, and will probably break the internet soon.

June 03, 2015
Periscope has taken off. On no other social media platform can you go face to face with celebrities… or ‘nobodies’ (and I use that term as affectionately as possible!), watch them doing anything, or nothing, like you can with Periscope. The Android version is finally out, and that made me very happy.

First Impressions
Periscope is not the platform for a polished broadcast, or for anything you want to last for more than a day. It IS a great way to engage directly, win the affections of your audience, and find out what’s on their mind.

Drawbacks? As a viewer, there is no direct way to search for content. However, it was made to work with your Twitter account. A workaround for searching for feeds is to do a twitter search for #Periscope plus whatever keyword you want to use. If a particular user comes up in that search and it looks like they might be interesting to you, then follow them on periscope, and get notified when they broadcast.

Observations
As a broadcaster, you want to give your content a thoughtful title - it can be descriptive, it can be basic, it can be sensational. Most of all it should attract the audience you are looking to draw.

Prepare for your broadcast. If you’re going to cook a meal, get a few of the ingredients together first. Nobody wants to watch you looking for the chicken broth. Or maybe they do… but I’m guessing not.
It might even be a good idea to schedule some specific broadcasts, tweet about it, build a following before you even go live, and ask people to share the broadcast with their followers. One account that is great at doing this is Suicide Girls. They are almost constantly streaming live, by splitting up the broadcasts amongst their girls, who have scheduled ‘shows.’ Today I watched one of them bake cookies for dogs, and took notes on the recipe. It was awesome.

Talk to your viewers, and engage with them by answering some of their questions.
Show your true personality. People will know if you’re being fake. Fake is a turnoff.

Broadcast whenever you can - when appropriate.

Don’t listen to the creeps. And there will probably be creeps, especially if you are a female.

It's only temporary
Sure, someone could theoretically record your stream and post it all over the place, making it permanent in the annals of Social Media history. But chances are they won't. You should embrace this fleeting medium and realize that it will be gone after a day. People can go back and replay broadcasts if you allow it, and you can save them to your camera roll if you're the broadcaster. But don't treat it like a YouTube or Vimeo account!

My experiences
My first broadcast was literally just me walking my dog. She is frickin’ adorable, so I wasn’t planning on even talking or interacting with people. I just wanted to show off my adorable dog Holly. I titled it, Walking my dog, and tweeted it. It probably showed up on the global broadcast list, and I pulled in about a dozen or so viewers in the first 30 seconds. One viewer in the chat said, ‘’Let’s see you”, so I flipped the cam around and said hello. I then said, “This isn’t about me, it’s about my dog”, to which the user replied, “It’s about you walking your dog”. I realized that Periscope is first and foremost about the PEOPLE in front of the camera. They are not chatting with the dog. They are chatting with you.

Bad idea: cooking Turkey Meatloaf on Periscope
My second broadcast was going to be me cooking meatloaf. I had been editing a cooking show that I produce, and was thinking, “I should try this!”. I got everything together, titled it, “Making Turkey Meatloaf”, and started the broadcast. People clicked - a lot more than I was expecting. I had nothing to say, other than ‘here is what I’m doing now’. People demanded that I speak. “Hello”, I said. Someone said, ‘Speak Turkish’. I told people that I didn’t speak Turkish. It didn’t take long for me to realize that people tuned in thinking that I was located in Turkey, would be speaking turkish, and they also expected me to be entertaining. Three strikes there. I got super nervous after about a minute, turned off the camera, and finished the meal ‘offline’. It came out great, though I can’t say the same for my periscope broadcast.

Chat
One of the most annoying (but vital) parts of the app is the chat function, with chat bubbles just floating up over the broadcaster's image. Tip: to hide the chat, swipe right, and tap the 'hide chat' icon and text. This will also add those annoying hearts (yes, I know they are important for ratings and such, but there has to be a better way to do this!

One of my favorite people to watch is comedian Bert Kreischer. Not only is he one of those hilarious, quick-witted motormouth comedians with a huge online following, he is always on with funny people, including his children. They have been raised by one of the most hilarious people on the planet, so it’s no surprise that they are hilarious as well. One of my favorite broadcasts (and running storyline of Bert’s channel) was when one of the neighbors wrapped his car in cellophane. He ‘scoped his (genuine) reaction to seeing this prank. He brought his kids out and told one of them to google ‘Revenge’. As I write this, he is currently scoping simultaneously while his Travel Channel series Trip Flip premieres. It’s him and a couple of friends, and all of their children (7? 8? I can’t tell). I have to say, it’s pretty entertaining. He’s someone who already has a huge social media presence: twitter, his podcast, everyone else’s podcasts, comedy specials, and cable TV shows. He Doesn’t need to use periscope. He already has a following - but, this platform was made for someone exactly like him, to broadcast impromptu, entertaining moments.

Other people I've loved watching:
Sock Cop (exactly what it sounds like - a sock puppet with a police hat and glasses, being hilarious)
Sam King is a musician and if you follow him he'll tell you about other interesting musicians that are scoping (I just watched a live show with @BaderinOzz that he told me about).
Brian Redban hangs with some funny comedians, like Sarah Weinshenk, and other LA Comics.


Scoper: a Periscope broadcaster
LifeScoper - one who ‘scopes everything. Some have been known to broadcast themselves sleeping. To each their own.  @BradManTV likes to do this.
Block Party - When someone is being a creep in the chat, and all of the viewers block them together.
Hearts - Like any social media 'like', tap the screen while watching and you'll send the broadcaster a heart. There is no limit to the number of hearts you can give. 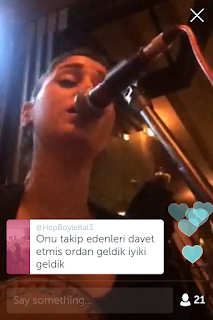 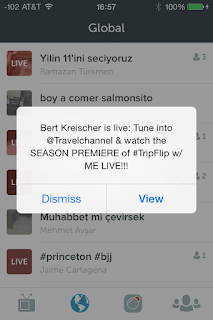 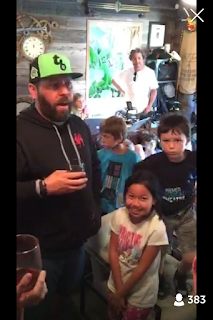