I'll admit right up front that I'm late in discovering House of Cards.I'd heard chatter around it when it came out, but didn't pursue it. I was neck-deep in watching the entire catalog of The Shield, and time is a precious commodity. The first episode was enough to pique my interest in the political drama that resonates throughout with tones of epic, almost Roman-esque intrigue, set in motion by players in a game much larger than themselves. It's a game with very specific rules, but far from predictable, as though one of the first rules is that the rulebook can be re-written by players with enough skill and willpower. It soon becomes clear that being able to check one's conscience at the door whenever they enter a room can help, too.

As a cinematographer, I tend to notice when a show's camera work extends beyond simple functional storytelling, and does more than relate a simple sequence of events to define the drama. Netflix's House of Cards achieves this brilliantly.

I will also say here that the Cinematography is not the only color at play in this canvas; the music, sound & set design, editing, and the Direction of David Fincher, are all woven together wonderfully. Nominated for an Emmy in all but two of those categories (sound & set design), as well as outstanding lead Actor & Actress (Kevin Spacey & Robin Wright), it deserved every one of them.

The scenes I've chosen to discuss are from Season 1, Episode 2.
One recurring 'theme' I've noticed throughout the first two episodes of the show is the use of frames-within-frames to define a character, and the emotional mood of the scene. The show's cinematography by Eigil Bryld is not flashy by any means, just deliberate, kinetic, and unapologetic. Characters are pushed from one frame or room to another, or swallowed up, just as they are pushed around by the powerful but unseen forces at work in the machine that is Washington. I am not very familiar with his work, but I can unequivocally say that I haven't looked forward to television cinematography as much as I'm looking forward to watching Bryld's work on this show.

First up is Clair Underwood (Wright), who is the head of an environmental lobbying organization in Washington, D.C., and the wife of Francis Underwood (Spacey), Majority Whip of Congress (we'll meet him in scene 2). Clair has recently instructed her assistant Evelyn to proceed with the difficult task of laying off 18 people, due to financial difficulties facing the company. Evelyn protests, begging Clair to look past the near-term budget situation, and keep these people on. It's obvious that Evelyn doesn't posses the stomach lining that Clair does (something that, it will become clear, is necessary for one's own survival in D.C.). Previous scenes have hinted at Clair's uncompromising willpower, but none have shown off just how  far she is willing to go to protect herself, and her empire. After Evelyn laments to Clair the difficulty of what she has just gone through in severing the employment of 18 of the company's employees, Clair drops a bombshell, and tells Evelyn that she will be among those leaving the company. Evelyn is (understandably) pissed off, chastises Clair for not caring about the welfare of the employees, and leaves, walking down a long hallway, and out of the picture.

(note: apologies for the quality of the screen grabs, they were shot straight from the television using my phone, but I think that they illustrate the ideas well enough) 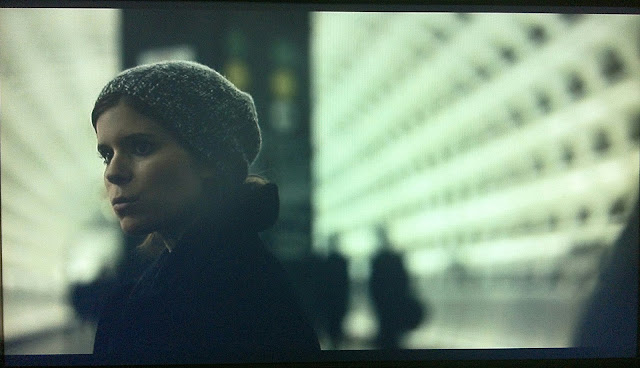 Zoe continues to put the pieces together and realizes that Underwood orchestrated the forces that brought down Kern.

The train as a device that represents opportunity is an example of great writing, direction, and cinematography all coming together to achieve the language of cinema. The device is also a cautionary one, and we get the sense that, like a train speeding down the tracks, it's passengers are all at the mercy of its conductor, who is clearly Francis Underwood.

I just hope that the train ride doesn't end like this one.