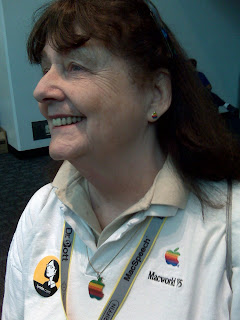 I attended Macworld for the second year in a row (didn't make it while living in SF a few years ago!) and, like last year, I wish I could've had more time there. I guess that trying to squeeze in lunch with old friends, AND the Final Cut Pro Users Group Supermeet in the same day, can be pushing it.

MACWORLD
I pretty much only use my mac for video editing, blogging, twittering, and watching movies. For these tasks, I think it is unparalleled. This single belief is enough to qualify me as a mac geek, though I can confidently say that I have never cancelled a meeting in order to watch a live stream of the keynote.
Carol, on the other hand, was at macworld 1995 (see picture at left. Note the apple earings, necklace, and shirt). Thanks, carol, for registering me!

Telestream had a great screen capture product that is a lot like ishowU, but instead of transcoding to the video format as it records, Telestream's ScreenFlow has a process of recording to an intermediary codec, and encoding it after the recording is done. This will help to minimize hiccups that one might experience with ishowU, especially on a system as slow as mine! This was a constant issue for me. I would run VJ programs such as VDMX or 3L, and attempt to record the output using ishowU. In theory, it is a great little application, but I would get constant, unacceptable gaps of dropped frames in the resulting video, even at relatively small sizes and not-too-demanding codecs.
Otherwise, Macworld was overflowing with third-party iphone/ipod skins, noise cancelling earbuds, and the usual office-style applications. I was really impressed (again) with MacSpeech, which would come in handy when logging hours of interview footage, and make the process go a lot smoother. Someone should integrate the MacSpeech Technology into HDLog Pro, so that, along with transcribing footage, it could automatically note the Timecode and pull frame grabs from the footage.

FCPUG Supermeet So I went to this with My friend Zach Richard. Zach is an incredible guy who works with me part-time at KTEH. He was with me at Macworld too, and is the type that seems to be able to pick out the coolest schwag that is being given away, and stock up on it, grabbing three or four of each thing to give away later to friends. I know that some people say, 'can I get a couple more of those laser pointers for friends of mine?' and just keep the pointers for themselves, but Zach will take the pointers home, wrap them up, and give them to people as presents, just because. He has a way of making people feel good like that.
So, all I can say is that it must have been simple Karma that let him win that night in the raffle. He won a pack of plugins for FCP from Furnace- I think they're the plugins that do things like noise reduction, film cleanup, etc. they make your ugliness pretty again (if only there were such a tool!) . He also got a few books and a macbook pro keyboard layout for final cut. I had been eyeing the same one earlier at the MW hall, and since he doesn't have a MBP he ended up giving it to me. Thanks Zach! 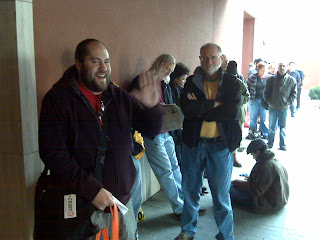 Oh, and we were the first ones into the meet. We didn't want to miss out on the goodie bags that they were giving out. Very cool schwag inside. Here's Zach in line.

The biggest news to come out of the Supermeet was the introduction (premier?) of the new JVC camera, the GY-HM100, which records onto SDHC cards in NATIVE QUICKTIME files- meaning, essentially, that you can now:
a) buy recording media for this guy pretty much anywhere, and
b) directly import files into your Final Cut project, without going through log and transfer.

The disadvantage I see to this (and also a disadvantage I've seen to the sony XD Cam when used with a disc drive like the PDW D1 or similar) is that you don't have the option of taking only parts of the clip. you are stuck with the WHOLE CLIP. while some people may say that 'memory is cheap, hard drives and raid systems are priced lower than ever, blah blah blah', it has been my experience that it is far easier to trim the fat of your clips and bring in what you need than it is to just ingest everything, and slice and dice later. This also means that you will need to either replace your drive sooner, or dedicate a day to go through all of your files and decide what to throw out, and what to keep, in order to free up valuable space.
For some people this will never be an issue. but for the tv station I work at, when I told our editor that the only way to do a file-based import of the sony XDCam clips into our Avid system was to import entire clips, he was shocked. so was our engineer. their immediate response was a collective 'we don't have the space for that.' I know.
but I digress...
The JVC is a great-looking camera, a little bigger than their everio line of cameras, with a bigger on-board mic attached to the top. Perfect space-saver (and, for the immediate future of your project, time-saver).
The JVC rep teased us all with a silhouette picture of the camera's 'big brother'. I think it's more of an ENG-style camcorder with removable lense.
There were some other good presentations, including a preview of Yun Suh's upcoming documentary, 'City of Borders'. All I can say is, what a perfect title for the film. It follows several gay men and women who live in palestine, and who go through dangerous border-crossings into Israel in order to visit gay nightclubs there. Fascinating look at divisions and, as the title suggests, borders that exist, or are broken down, by individuals and the societies in which they live. If you get a chance to see it, definitely check it out.
Another great presenter was M Dot Strange. I really like the 3D work that he's done and, being a VJ myself, I love to witness the creative process for other VJs, and it was very humbling to see some of the techniques that Mr. Strange used in his productions.
Key word: simplify.
The 3D modeling programs that are out there today can be very overwhelming for the first-time user (myself included). but there is a certain breaking point, after you learn the basics and what commands are available to you, that your proficiency can take off and create amazing-looking things. He showed how he was able to make a character that he'd created 'dance' just by moving the mouse (attached to a certain point in the 3d character's body) while playing back the music (the particular project was a music video). with just a little practice, and as long as you know what it is you're going for, you can somplify the process and still come out with great results.
Eric Escobar also gave a presentation which also used 'simplify' as its over-arching message. His examples were of how to create the look of a million-dollar production by using the tools that you have. The example that he gave was basically 'how to create evil' (or the feeling of Evil). He took the TV show Heroes (which I always admired for its clever use of simple techniques) and the character Skylar (Gabriel). He then looked at some screen grabs and wrote down some notes on how the 'evil' look was achieved, including camera placement, lighting, setting, character, etc.
He outlines everything in his post HERE
I'm looking forward to next year's supermeet for sure. Macworld? maybe not so much.